There were four models of G-series rifles manufactured over the years: 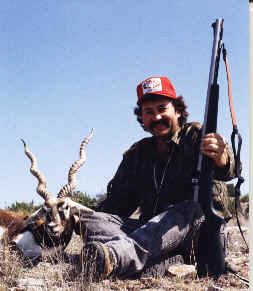 Roger Raglin of BKS productions with a White G-series Whitetail and a record breaking blackbuck.

David Gumucio brought the basic design to Doc in 1992. Doc engineered it for production and the original White Systems company brought it out  the same year. It was enormously successful and was White’s fastest selling rifle. It came in .410, .451 and .504 calibers, sporting stocks made of hardwood laminate, hardwood, and black fiber-composite. Earlier stocks had pulls of 13 1/2 inches while later stocks were 14 inches. All had fully adjustable triggers, two safeties- one on the cocking lever and another on the trigger. Barrels were 22″ long, in blue or stainless. They weighed about 7 lbs., depending on caliber and stock.

White Muzzleloading  occasionally  trades into one of these rifles, most are used and get refurbished by Doc to near new status. All will have been accurized. Docs ‘GBW’ cipher will be found on the fore-action bridge indicating he has personally worked on it.  All shoot as good and sometimes better than new. 3 inch groups with open sights at 100 yards are common. It won’t get shipped if it won’t shoot.

Hyperlinc to ‘on sale’  and/or to  ‘custom modern.’ ( top of page) for availability and prices,  then email ‘doc@whitemuzzleloading.com’, or  call or write for further information on the Whitetail of your choice. All rifles guaranteed to please or money back. Seven day inspection privilege.

Your satisfaction is guaranteed. If you aren’t pleased, you get your money back, no questions asked. 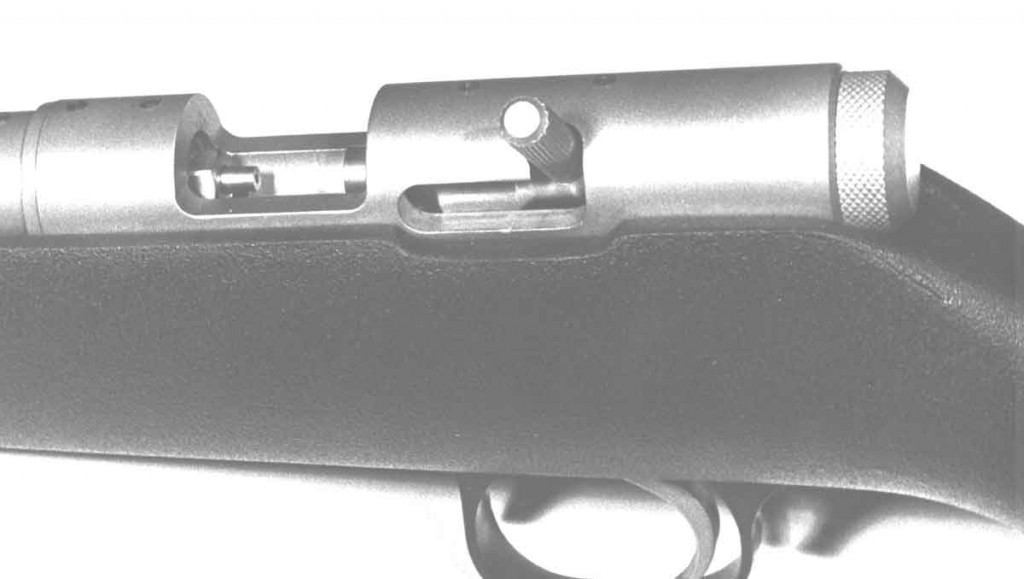 Left side view of the Whitetail

SEND YOUR DETAILED ORDER AND M.O. OR CASHIERS CHECK TO; 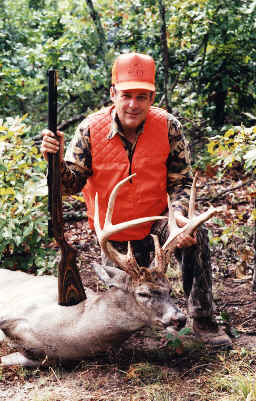 This is DOC White with a fine 140 class whitetail taken during an early season with a laminated stock White Bison in 54 caliber.

An original production White Bison rifle. Bison rifles may be found with any of the stocks found on the Whitetail. All were the best bargain in muzzleloading, inexpensive yet  accurate and hard-hitting with reduced recoil. Stock design was functionally elegant.

The White Bison was based on the G-series action, same as the Whitetail, and was probably the most stable rifle that White ever produced. Few of them ever come back, probably because of the straight bull barrel. They are almost always super accurate. Oddly, they were the next to cheapest rifle produced (the White-Lightning was the least expensive), and were a real value for the money. Features are similar to the White Whitetail except for the heavier barrel and dovetailed sights. The rear sight was a Williams adjustable, the front  a brass bead. There aren’t many around and White Muzzleloading seldom sees one.

Goto ‘on sale’ and/or ‘custom modern‘ at top of page  for availability and prices of used and customized guns and kits. Remember, all prices are negociable and although no gun is guaranteed, your satisfaction is guaranteed. You like it or you get your money back, no questions asked.

Custom Bison rifles and kits  are  available in 504 caliber.

Once again the Bison is available as a custom rifle or as a kit at reduced price with all parts included. Takes about an hour for a beginner to assemble the rifle, another hour to finish the stock. Barreled action sports a new old stored Criterion barrel, with Bold adjustable trigger, steel trigger guard, dovetail sights, plain but excellent grade maple stock  with inch thick recoil pad. Action parts are stainless steel, including the unique DOC-designed nipple-breechplug for #11 cap. A 209 conversion kit is available separately from ‘whiterifles.com’.

Goto ‘on sale’  for price and availability of a custom Bison rifle or kit.

The rarest White rifle, so rare I didn’t have one in my collection for a while. Only 2000 were made in 1994 and all were sold by 1995 for less than $299 each. Wilson made the barreled actions and did such a great job that no Lightning rifle has ever been returned because of accuracy problems. I have never had one traded in, ever!

The barrel and action were one piece in one inch diameter, the only caliber was .504 with a slightly tapered 22 inch barrel , the lightweight SG-series action (SG means small G) was a mirror image of the Whitetail and Bison actions only with the cocking handle on the right and the trigger safety on the left. Internal parts were otherwise the same as all other G-series rifles except the hammer, which the idiot machinists made slightly larger. Stocks were lightweight birch, painted black with a rubber recoil pad. Weight was right at 6 lbs. I never saw an inaccurate one.

White lightnings are available only occasionally. I have had only a few for trade. This is a photo of a customer’s white lightning.

This was an improved variation of the G-series. It featured two action screws and an enlarged recoil Lug with a slightly heavier barrel available in 22-26 inch legnths. Otherwise it was the same design as the original Whitetail. 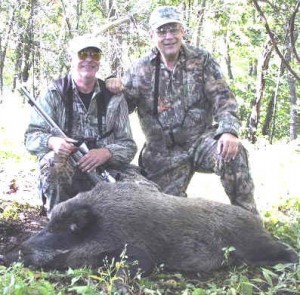 The Model 97 Whitetail Hunter was an exciting improvement on its predecessor, the  White Whitetail, it was available in 451 and 504 caliber with laminate stock

The WHITE M97 Whitetail Hunter was re-engineered by Doc White

There were Two action screws on the new M97, instead of one like on the Whitetail. The recoil lug was different , too,  a big square piece of steel with the front stock screw fitting into it. The rear stock screw fitted a round lug at the rear of the action. Both were firmly welded on. All other parts were  inter-changable with the older Whitetail with the exception of the barrel channel in the stock.

There was a slightly heavier straight taper 22 inch barrel for better balance and accuracy. It was also available in up to 26 inch length with two ramrod ferrules on special order

The M97 used the same magnificent slip- fit and saboted bullets as the older White rifles. Also accurate with competing sabots and bullets.

Tolerated up to 150 grains equivalent of Pyrodex (P is preferred) or 150 grains of Triple 777, or other reproduction powder,  or three 50 grain  pellets when shooting sabots.

The M97 sported a seven groove barrel with truncated rifling designed by Doc and produced by Criterion for superior accuracy, slick-quick loading and numerous shots without cleaning. Calibers were .451 and .504

New fiber-optic sights by Marble with two green dots at the rear and a single red dot at the front for unparalleled visibility.

Above- M97 Ultra Mag with 26 inch barrel and B&C fiber-composite stock with their spidery speckled finish. This was by far the finest, most ergonomic stock Doc ever designed for the M97. It had a slight palm swell (both sides) and weighed nearly a lb. less than a laminate stock. The Ultra Mag was a custom special for Sportsman’s Warehouse, conceived and executed under our Mass Customization program. Sportsman’s wanted a longer barreled rifle with a lighter stock and fiber-optik sights for sales in the mountain West where ranges are longer than the Eastern woods. This is the result.

The M97’s action is ergonomic with weak hand operation of cocking lever (you keep the strong hand trigger finger near the trigger that way), two safeties, one on the cocking lever and another on the trigger, fully adjustable trigger, drilled and tapped for peep or scope, unique one piece nipple-breechplug for #11 caps with flash distance so short that you don’t need musket caps, (although one was available) or shotgun primers, (although a conversion kit was available), Doc-designed  stock in a handsome smoke-gray laminate or B&C fiber-composite. Action parts were interchangable with the older G-Series White action parts.

OCCASIONALLY WHITE MUZZLELOADING HAS A USED M97 IN STOCK. THESE RIFLES WILL  HAVE BEEN RE-FURBISHED AND RE-CONDITIONED TO NEW, GLASS-BEDDED WHERE NEEDED AND ACCURIZED. ALL OF THEM WILL SHOOT AS GOOD AND OFTEN EVEN BETTER THAN NEW.

SOME OF THEM ARE TRADE-INS, SOME ARE RESEARCH GUNS, SOME ARE SECONDS BECAUSE OF TINY FLAWS (FLAWS WILL BE SPECIFICALLY IDENTIFIED), BUT ALL ARE AS GOOD AS NEW, AND SOMETIMES BETTER.

ALL HAVE DOC’S GBW CIPHER ON THE ACTION BRIDGE. HIT THE ‘on sale’ HYPERLINC  AT THE TOP OF THE PAGE  TO CHECK AVAILABILITY AND PRICE.

This rifle had the same stronger features as the M97 Whitetail Hunter but with the original lighter weight 22 inch barrel of the original Whitetail.

Upper sling swivel on the barrel thimble for low carry

Lighter weight- about 7 lbs depending on caliber and choice of stock.

Sometimes a used M97L shows up for sale