currently available but on custom order only- 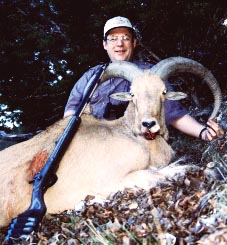 Doc with a big South Texas Audad (Barbary Sheep), taken with a White 50 caliber Sporting Rifle. The load was a 480 grain PowerPunch bullet over 100 grains Pyrodex P. Range was 85 yards, peep sights, the bullet going through and out the other side. These critters are tough, but this one only went a few yards before going down. The big red splotch on the animals side is the bullet exit, the hit was on the opposite shoulder. Horns are a pretty good 30 inches.

THE WHITE SPORTING RIFLE SPORTS A FRANK REPRODUCTION OF THE FINEST SIDELOCK BREECHING SYSTEM EVER DEVELOPED. THE ONLY IMPROVEMENT IS THE METAL IT’S MADE OF, 4140 INSTEAD OF COMMON IRON. THEY ARE VERY PLEASANT TO SHOOT BECAUSE OF THE EXCELLENT STOCK DESIGN AND ARE EXTREMELY ACCURATE. I USE A 451 TO COMPETE IN THE LONG RANGE (200-1000 YARD) COMPETITIONS WITH BLACK POWDER BREECH-LOADERS. IT WILL SHOOT RIGHT UP THERE WITH THEM. I’VE NEVER WON A MATCH BUT I’VE SCARED THEM BADLY. BEST GROUP I’VE EVER SHOT WAS 6 INCHES AT 400 YARDS USING VERNIER SIGHTS WITH GLOBE FRONT.

THE GREAT ENGLISH GUNSMITH MANTON DEVELOPED THIS SYSTEM IN THE LATE PERCUSSION PERIOD. IT’S HANDSOME DESPITE THE MASSIVE HUNK OF STEEL BELOW THE NIPPLE, AND THE LOCK PLATE BUTTRESSES THE  ACTION IN THE STOCK, A MUCH STRONGER AND MORE ELEGANT ARRANGEMENT THAN ANY OTHER CONTEMPORARY OR MODERN  DESIGN. IT ALSO FEATURES A LONG TANG JUST RIGHT FOR A TALL VERNIER REAR SIGHT

BARRELS CAN BE ROUND OR OCTAGON, CALIBERS ARE THE SAME AS OTHER WHITE PRODUCTS, .410, .451, .504, USES THE SAME ELONGATED SLIP-FIT  OR SABOTED BULLETS AND IS JUST AS ACCURATE WITH WHITE DESIGNED BULLETS AS ANY OTHER DOC-DESIGNED RIFLE. BEST ACCURACY COMES WITH AN ELONGATED SLIP-FIT BULLET CUSTOM SIZED TO BARELY SQUEEK INTO THE BORE, MAYBE EVEN 1/1000TH OVERSIZSE AND CLEANING BETWEEN SHOTS.

NOT MANY WERE MADE AND THEY ARE HARD TO FIND. NEW ONES AE AVAILABLE FROM DOC BUT MAKING  EACH ONE IS A CUSTOM PROCESS: TRANSLATE- SLOW AND ALWAYS LATE. Prices available On Request.

IF YOU LIKE TRADITIONAL MUZZLELOADERS, YOU’LL LOVE THE SPORTING RIFLE.

Pricing varies with the condition and rarity of the gun. Hyperlinc above to ‘on sale’ &  ‘custom traditional.’ examine the list, then key, call or write for specific information. All prices are negociable. Satisfaction is guaranteed or $ back.

BELOW ARE SOME EXAMPLES OF DOC-BUILT CUSTOM MADE SPORTING RIFLES.

This rifle started life years ago as a prototype for White Systems, but never was accepted so never came into production. As such, it is one of a kind.

This stock is a brown laminate, finished English Red, with recoil pad. Most English Sporting rifles had steel butt-plates but a few were produced with leather covered rubber recoil pads in later years.  Note the tight lock-up of side-lock and the heavy Manton style breech bolster. This is the strongest side-lock system ever developed.  Available only from DOC on a custom basis.

DOC-built 451 caliber English Sporting rifle with super fancy walnut halfstock, really an elegant piece of wood. You can see that the breech is a Manton with Drip Bar over the traditional flat spring lock. There is a pistol grip and Alexander Henry forearm. The lock is a Henry design too. The Kelly barrel is tapered octagon 30 inches long in 451 caliber with 1-20 twist and shallow 0.035 thou deep grooves,meant for long lubricated White (or Whitworth) type elongated lubricated bullets. These guns are terrific hunting rifles and are capable of 1000 yard target shooting. All furniture is iron, the buttplate is checkered wood, an English whim of the 1860’s. There is an under-rib with two ferrules. The barrel is browned, the other iron furniture blued and the stock varnished English style. Sights are a Globe front and English style adjustable  ladder rear- looks much like the adjustable ladder rear Springfield sight that was so popular from the 1850’s on. (Springfield copied it from the original English Sporting-Target rifle sights).

Although this is a beautiful rifle, it was designed to be used. It is extremely functional and ergonomic, every part of it friendly to the user.  The butt is thick and wide to soak up recoil, it fits shooters using either hand without alteration, balance is superb for offhand, sights are adjustable and good for up to 700 yards as is. 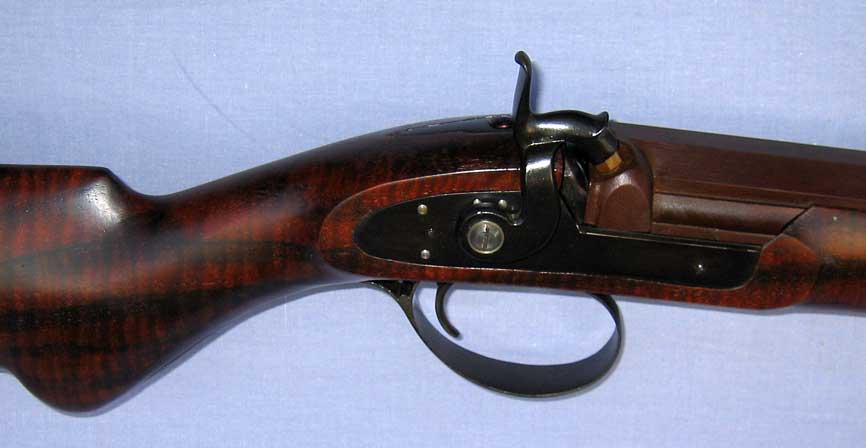 Look at all the steel surrounding the nipple. It’s the strongest system in the world, bar none. The drip bar above the lock just in front of the bolster gets rid of the weak wood above the lock that you see on Hawkins and the like. The rear sight is the spring loaded ladder type with a sliding adjustable notch-on-bar. 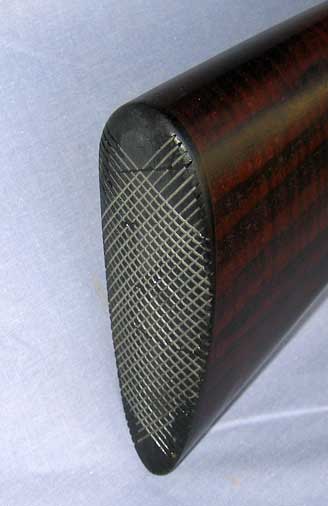 The lock is held by a single bolt and the barrel by a single key. The accents are German Silver except for the brass ramrod tip. Weight is about 8 lbs. The rifle throws up to a 520 grain lubricated bullet with terrific accuracy and force. Ballistic Coefficients are up at .300 for fantastic downrange performance. Bullets load slip-fit so second shots are fast yet accurate. These are the best of the traditional muzzleloading rifles.

These Sporting Rifles are truly extraordinary. The barrels were originally designed by Whitworth using a long hexagonal bullet and a fast 1-20 twist. That bullet was later modified by various English designers including Rigby and  Medford, then later by myself, becoming the multi-grooved, round cross section, lubricated bullet used nowadays in Whitworth, RIgby and White rifles. All are capable of astounding long range accuracy and superior down range killing power. I can’t claim much in all this- all I did was adapt the Old Masters ideas to modern production techniques. None-the-less, these are the finest, quickest and most powerful modern muzzleloading hunting rifles in the world!

YOU CAN HAVE ONE LIKE THIS, STRAIGHT FROM DOC, CUSTOM DONE WITH CUSTOM FEATURES, AVAILABLE IN .410, .541 and .504 CALIBERS, OCTAGON OR ROUND BARRELS, CHOICE OF BARREL LENGTH, SINGLE OR DOUBLE SET TRIGGER, STRAIGHT OR PISTOL GRIP, LONG OR SHORT TANG. CHOICE OF SIGHTS; LADDER TANG MOUNTED PEEP, LADDER REAR, PLAIN OR GLOBE FRONT SIGHT, WITH OR WITHOUT WIND GAUGE, EVEN A PAULEY STYLE TRADITIONAL IN-LINE IF WANTED.

Here you see a DOC-built English Sporting Rifle in .451 caliber with rather plain but strong grained walnut stock with pistol grip and fancy wood butt plate. The butt end is checkered in the English fashion. There is a Henry percussion sidelock to fit that Manton breech, plus drip bar, as well as a single fore-end key in silver ovals and Alexander Henry fore-end treatment. It has an adjustable single set trigger, under-rib with double ferrules and adjustable long range sights to match the Kelley 451 caliber 1-18 twist shallow groove barrel. It is designed to use 500+ grain White/Whitworth style long lubricated bullets and is capable of 1000 yard target as well as closer ranged hunting. It looks very much  like the 2 rifles above but with a slightly heavier barrel and plainer stock.

The English made many sporting rifles with the sidelock on the left side, but meant for use by a right hander. They had noted that the right hander’s thumb lies in perfect position to cock a left sided hammer . This rifle, made by DOC, is made in that style. It’s fully useful for both right and left hander. It is 504 caliber, with White 1-24 twist rifling, made for the same Power Punch and Power Star bullets that shoot so well in White designed rifles. The lock and hammer are false, as were all of Pauley’s designs, pulling back on the hammer cocks the in-line mechanism so you can cap it ready for the shot. There is also a Side Lock Safety, designed by DOC, that locks the trigger in SAFE when straight up, and releases it for FIRE when horizontal. It is located on the right side. The folding rear sight is mounted on a quarter rib. The tang is long, and will accomodate a tall Vernier rear sight if wanted.

The stock is walnut with nice grain running correctly through the wrist, the pistol grip is capped by rosewood. Both are stained English Red, then varnished with Brownell’s fantastic waterproof epoxy varnish. The metal is finished with bright blue Dura-Coat, a better and more durable finish than any ordinary brown or blue. 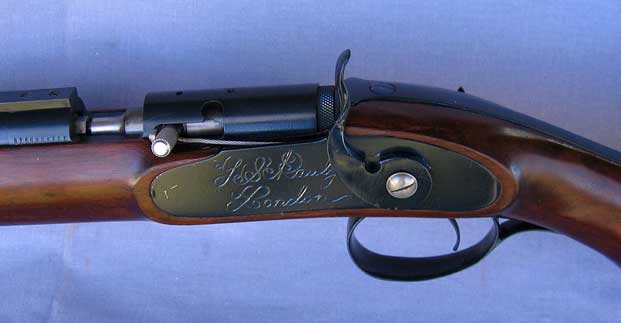 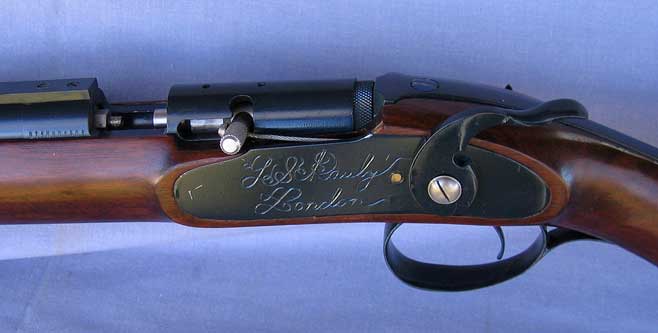 The Side Lock Safety is seen here at the rear of the sidelock panel in a very ergonomic position. (PHOTO LEFT) It locks the trigger, which locks the hammer, when upright on SAFE. Push it forward for FIRE. The trigger is single, with a 2 lb. letoff. It is adjustable.  The left sided cocking handle, seen above in the middle and right photos, is actuated by a braided wire, which means you can cock the hammer (seen on the right above) then push it forward out of battery for the shot (see below, left) That way there is no weight on the inline hammer. 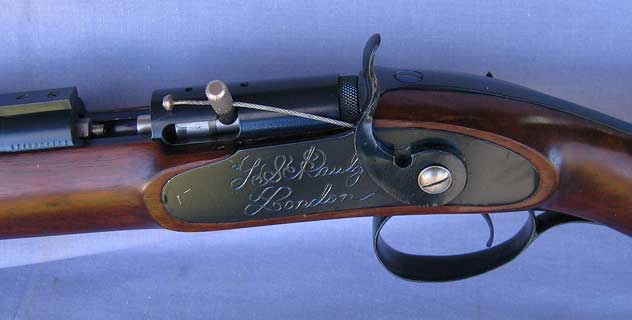 Also, the hammer cocking handle can be rotated into the up-lifting safety notch for a second and very secure SAFE when the rifle is cocked.  (photo left, above) The quarter rib and folding rear sight can be seen in the photo right, above. The front sight is a fiber-optic red bead on a ramp. The ramrod rides on an under-rib and is held by two ferrules. The long tang will take a Vernier rear sight if you want, The fore-end is styled after Henry. There is a rubber recoil pad, which does not look at all out of place. The English originated leather covered rubber pads at about the time this rifle was designed in 1812. J S Pauley London is engraved on the lockplate. The rifle has been accurized, shoots into three inches at 100 yards with the open sights and my old eyes and it is right on the money at that range with 80 gr fffG 777 and a 500 grain No Excuse bullet.