SOON TO BE AVAILABLE WHITE BULLETS

White Super-Slug & PowerPunch bullets were DOC -designed to work in older White rifles and in the newer White 97, 98 and the ThunderBolt. They were available for all .410, .451, .504, and .540 caliber rifles. They were  solid ‘enhanced’ lead bullets, with deep channelures to hold lots of Doc’s special blue  PowerLube  muzzleloading lubricant, a generous flat-nosed meplat to promote rapid expansion in game, and a slight boat-tail so they load easy and fly faster. These great bullets look good, so you know they shoot good.

Now available only from ‘whiterifles.Com’ on the web 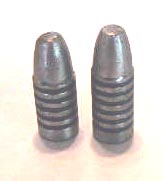 Soon available only from ‘whiterifles.com’ on the net.

The formidable 50/45-435 PowerStar saboted bullet, for 50 caliber rifles, throwing a 45 caliber bullet weighing 435 grains with a ballistic coefficient of 26. A charge of 120 grains of Pyrodex P behind this bullet in a White rifle yields over 1200 ft lbs. of energy at 200 yards.

White Muzzleloading is working on bringing DOC’s patented lubricated sabot and bullet to production. This is a true rifle bullet, long and hollow-pointed. This is not a lightweight pistol bullet. It will be available for 45 caliber rifles with a 350 gr. Hollow point bullet and for .504 caliber rifles with choice of 320 or 435 grain hollow point bullet.

Availability: ‘whiterifles.Com‘ on the net, hopefully late this year or the next. 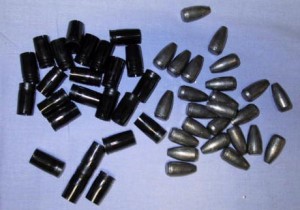 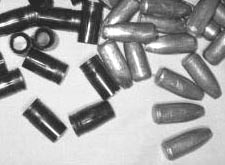 The new .504 caliber 320 grain hollow-pointed PowerStar bullets (illustrated left. This lighter bulle.tr uses the same lubricated SuperSabot Doc developed for the 435 gr PowerStar, (on the right.) They are made of the softest lead for best expansion in the Barrel and in Game. Both are true rifle bullets with substantial Sectional Densities and Ballistic Coefficients, not short poorly performing pistol bullets used in rifles.

The patented futuristic new Self Cleaning Sabot (SCS), unfortunately never brought into production. It would have changed your muzzleloading forever. No longer would you have needed to clean any brand rifle between shots, whether on the target range or in the field. The SCS cleans the barrel with each shot, leaving the same amount of residue as if it were the first shot. Click on SCS for more information. Every shot a first shot. White Muzzleloading is again working on bring this innovative bullet into production.

This fantastic Self Cleaning Bullet , with patented copper tented gas check, might someday soon become available in popular weights and calibers.  The tented copper gas-check will flatten and expand into the rifling, cleaning residues from the prior shot, cleaning your rifle as you shoot it, so you won’t have to clean between shots to maintain accuracy. You will also be able to shoot larger charges of powder without losing accuracy because of bullet base melting. It makes cleaning chores a lot easier as well. Click on SCB for more information.

504 caliber, 600 grain SCB PowerPunch bullet, shown before firing and after recovery from the huge Asian Buffalo pictured in The Second Biggest Buffalo In The World
.

Some shooters would like to find an alternative source of supply. I have liked the ‘no excuse’ brand, made in ogden, utah. They are manufactured on white principles and shoot in white rifles as if they were made by white. I highly recommend them

The ‘powerstar’ line of hollow pointed saboted bullets was manufactured for white by buffalo bullets. They can be ordered from the buffalo bullet factory or purchased retail from one of their many dealers. Use them with a harvester sabot.

The barnes’ line of bullets and sabots are also excellent . They can be purchased from one of their many dealers. Go for the heavier of the line, for example, in 50 cal: in weights of 300 or more grains. That means a 50 cal sabot with a 45 cal bullet weighing 300 grains or more.

I have also done well with a harvester ribbed sabot with a 300 grain hollow-pointed hornaday 45 cal pistol bullet. The 300 grain bullet made for the 45 long colt in .452 diameter is just right for rapid expansion in deer sized game.