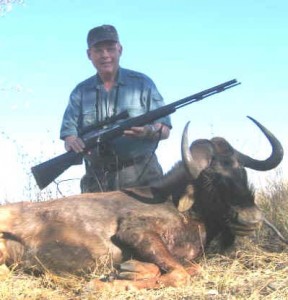 The strongest, most accurate and hardest hitting muzzleloading rifle in the world! There was not a better one made. Quality throughout!!!

That elegant bolt handle cocks on closing, locks the 209 in place tight as you care to adjust it, so there’s not much gas blowback. The spent 209 will usually pop out of the primer pocket when you ram down the next bullet, at least until the pocket gets too dirty. This is the quintessential White rifle, the best work I ever did. You should see it perform with the new 209 BlackHorn powder and a saboted DOC-designed bullet. WOW!

WHITE RIFLES LLC announced the new White ‘THUNDERBOLT’ in Jan ’02. Doc White, who originally designed the White Muzzleloading System had redesigned his fabulous Super-91 into the new, superb ‘THUNDERBOLT’. Doc produced the most functionally elegant bolt action muzzleloading hunting rifle in the world, by far the best of its kind. The THUNDERBOLT retained the corrosion resistant stainless steel, quick loading , marvelous handling and fearsome power of the other Doc-designed White rifles.

In addition, the new THUNDERBOLT had a 26 inch barrel for enhanced velocity and even better accuracy. Looks and balance were every bit as good. Doc’s great stock design guaranteed improved distribution of recoil forces despite heavy loads for the biggest of game.

Designed specifically for slip-fit White PowerPunch bullets. Most hunters can reload and shoot in 20 seconds or less with a little practice. Way more than 1000 ft lbs energy at 200 yards, even with the .451 caliber. The big .504 with 600 grain PowerPunch bullet will produce well over 1600 ft lbs at 200 yards for really big game. Also superbly accurate with White’s saboted 320 or 435 grain .504 caliber PowerStar,, the 350 grain saboted 45 caliber PowerStar, the brand new SCS Self-Cleaning Sabot, plus competing sabots and bullets by others.

Simple, easy to use bolt action with cocking knob much like that on the ’03 Springfield. No tool field takedown- the hammer housing comes out of the action as a unit. Adjustable trigger set at 3 1/2 lbs at the factory.

One piece hardened tool steel Breechplug carefully machined for 209 shotgun primer. (Weaker 209 PRIMERS MADE ESPECIALLY FOR MUZZLELOADERS or Trap & Skeet primers, like the CCI, work best in the short White breechplug.) Breechplug can be adjusted with supplied wrench to fit Primer so well with bolt action locked up against it that there is very little blowby yet primer extracts easily with fingernail. Breechplug comes out easily with wrench supplied as long as you keep it well greased with White’s blue moly lube when replacing it.

Drilled and tapped for peep and scope,

Safe for use of up to 150 grains equivalent of Pyrodex (Select is preferred), 150 grains of Hodgden’s new 2 FG 777 or three 50 grain Pyrodex Pellets for maximum power in 504 caliber. (451 caliber proportionately less) However, that much is rarely needed.

CAUTION- The short White breech-plug and the 209 primer combination produce so much more flash than either #11 or Musket caps that chamber pressures and bullet performance are markedly different. Note that Pyrodex Select is the preferred powder. Pyrodex P is too fine grained for this application. If you use other powders, use the coarser grained rather than the finer as you would with M97 or M98 White rifles with #11 or Musket caps.

Most often, maximum loads are not required because of enhanced performance due to the breech-plug primer combination. In 451 caliber 70 grains of Select is an excellent hunting load. In 504 caliber, 90 grains is plenty and two 50 grain Pyrodex pellets are more than enough. Never use a Magnum 209 primer, the best primers are those made especially for muzzleloaders. Reducing the flash produces a more accurate load.

Conversion kit for the new 336 primer was offered.

USED THUNDERBOLT RIFLES- WHITE MUZZLELOADING OCCASIONALLY HAS USED, BUT RE-FURBISHED AND RE-CONDITIONED THUNDERBOLT RIFLES ON HAND. SOME ARE TRADE-INS, SOME HAVE BEEN USED FOR RESEARCH, BUT ALL ARE AS GOOD AS NEW, AND OFTEN BETTER, ALL HAVE BEEN BEDDED WHERE NEEDED AND ACCURIZED BY DOC. MOST SHOOT BETTER THAN WHEN NEW. OF COURSE THEY ARE GUARANTEED, SAME AS NEW. CHECK THE ‘On Sale’ AND/OR’CUSTOM MODERN,’ SECTION OF THE HYPERLINC LIST AT THE TOP OF THE PAGE TO SEARCH FOR WHAT’S AVAILABLE.