The Model 97 Whitetail Hunter was an exciting improvement on its predecessor, the White Whitetail, it was available in 451 and 504 caliber with laminate stock

The WHITE M97 Whitetail Hunter was re-engineered by Doc White

There were Two action screws on the new M97, instead of one like on the Whitetail. The recoil lug was different , too. It’s a big square piece of steel with the front stock screw fitting into it. The rear stock screw fitted a round lug at the rear of the action. Both are firmly welded on. All other parts are inter-changable with the older Whitetail with the exception of the barrel channel in the stock.

There was a slightly heavier straight taper 22 inch barrel for better balance and accuracy. It was also available in up to 26 inch length with two ramrod ferrules on special order

The M97 used the same magnificent slip- fit and saboted bullets as the older White rifles. Also accurate with competing sabots and bullets.

Tolerated up to 150 grains equivalent of Pyrodex (P is preferred) or 150 grains of Triple 777, or other reproduction powder, or three 50 grain pellets when shooting sabots.

The M97 sported a seven groove barrel with truncated rifling designed by Doc and produced by Criterion for superior accuracy, slick-quick loading and numerous shots without cleaning. Calibers were .451 and .504

New fiber-optic sights by Marble with two green dots at the rear and a single red dot at the front for unparalleled visibility.

M97 Ultra Mag with 26 inch barrel and B&C fiber-composite stock with their spidery speckled finish. This was by far the finest, most ergonomic stock Doc ever designed for the M97. It had a slight palm swell (both sides) and weighed nearly a lb. less than a laminate stock. The Ultra Mag is a custom special for Sportsman’s Warehouse, conceived and executed under our Mass Customization program. Sportsman’s wanted a longer barreled rifle with a lighter stock and fiber-optik sights for sales in the mountain West where ranges are longer than the Eastern woods. This is the result.

The M97’s action is ergonomic with weak hand operation of cocking lever (you keep the strong hand trigger finger near the trigger that way), two safeties, one on the cocking lever and another on the trigger, fully adjustable trigger, drilled and tapped for peep or scope, unique one piece nipple-breechplug for #11 caps with flash distance so short that you don’t need musket caps, (although one was available) or shotgun primers, (although a conversion kit was available), Doc-designed stock in a handsome smoke-gray laminate or B&C fiber-composite. Action parts were interchangable with the older G-Series White action parts. 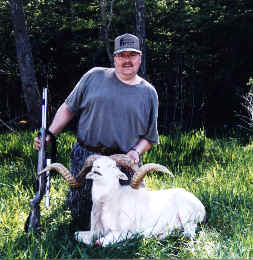 Grant Engle with a WHITE M97 Whitetail Hunter and the biggest Corsican Texas Dall sheep ever!

OCCASIONALLY WHITE MUZZLELOADING HAS A USED M97 IN STOCK. THESE RIFLES HAVE BEEN RE-FURBISHED AND RE-CONDITIONED TO NEW, GLASS-BEDDED WHERE NEEDED AND ACCURIZED. ALL OF THEM WILL SHOOT AS GOOD AND OFTEN EVEN BETTER THAN NEW.

SOME OF THEM ARE TRADE-INS, SOME ARE RESEARCH GUNS, SOME ARE SECONDS BECAUSE OF TINY FLAWS (FLAWS WILL BE SPECIFICALLY IDENTIFIED), BUT ALL ARE AS GOOD AS NEW, AND SOMETIMES BETTER.

ALL HAVE DOC’S GBW CIPHER ON THE ACTION BRIDGE. HIT THE ‘CUSTOM, USED MODERN CONTEMPORARY‘ HYPERLINC IN ORANGE AT THE TOP OF THE PAGE TO CHECK THE LIST.