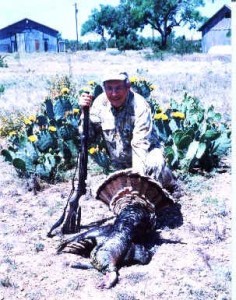 Unlike muzzleloading rifles, the White G-series Tominator muzzleloading shotgun shoots every bit as good as any modern shotgun, they just don’t reload as fast. Shot charges are the same, as are velocities. Patterns can be better simply because there is no shotshell to force open on firing and no forcing cone to bruise the shot. Add a straight rifled barrel and  Hastings interchangable choke system, like DOC has done with the ‘Tominator’ and patterns can be awesome. First shot patterns of 90-95 % at 40 yards come easy as long as you follow directions.

See the article entitled ‘The Tominator Shotgun” in Doc’s book, The White Muzzleloading System“. It’s right here on the web under ‘Doc’s Books and Articles’ above.

The ‘Tominator’ is based on the White BG-series action, modified to accept a 25 inch long, 12 gauge straight rifled barrel with ventilated rib and interchangeable Hastings choke. The original nipple-breechplug was one piece stainless tool steel  taking #11 caps. The new plug is also stainless but with a removable #11 nipple for your convenience. Trigger is the same as other G-series rifles, so you get a slick rifle-like trigger pull. Stocks are walnut or maple, painted black. Pull is 14 inches over an inch thick recoil pad. Weight is about 6.5 lbs, but felt recoil is modest because of the stock design. Use it with DOC’s recommended loads and you’ll get 80% plus first shot patterns with the included full choke. That’s better performance than you get from any modern shotgun. If you want really super first shot patterns, order a Super-Turkey choke at extra cost for 95% first shot performance.

The Tominator kills turkeys better than any shotgun on earth, including all the modern ones, even the magnums.

Doc’s favorite load for turkey: after firing a squib of 20-30 grains powder, (use black powder or any of the substitutes, Doc likes ffg black powder best), throw a charge of 100 grains down the barrel, follow with two  felt 1/8th inch lubricated wads, then follow with a White tapered Power-Cup.  (available from White Muzzleloading)  you won’t be able to get a non-tapered shot-cup through the tight choke. Cut the shot-cup with 4 leaves a half-inch deep. Now throw down enough shot to fill the shot-cup, (about 1 7/8 oz lead shot, preferably copper or nickel plated), and follow with a 1/8 felt wad or card top-wad to hold the shot in place. You’ll get 88-95% patterns, depending on which choke you use, how deep you cut the plastic shot-cup and the hardness of the shot. Nickel plated is best. Doc has killed turkeys as far off as 55 big steps with this load, using nickle plated #7 shot.

White Muzzleloading  most often  has a new or used Tominator on hand or ready to build. Click on the ”ON SALE’ hyperlink above and check the list. Then email, call or write with your wants. The cost is modest, depending on condition.