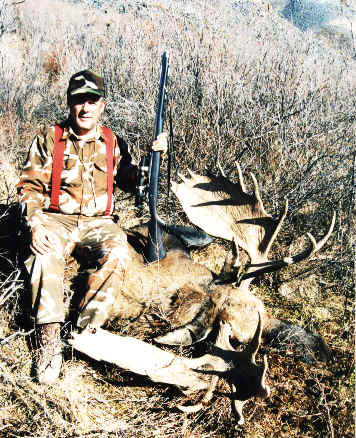 Here I am with a White Super Safari in 504 caliber, shooting a 600 grain Super-Slug over 120 grains Pyrodex-P. Range was 170 yards, shot was taken offhand. The bullet ranged from high on the right rear ribs, forward and down through the huge vessels of the heart and lungs for an instant kill. The bullet expanded to about dollar size, traveled through nearly three feet of moose before coming to rest in the muscles between two ribs far forward on the bull’s chest. The bull fell with the impact of the bullet and never wiggled. This is a good example of how effective a big bullet can be. Below are the ballistic reasons why big bullets are so effective.

Ever wondered why those big White bullets slam your game to the ground like they do? Ever wondered why the game shot with short lightweight pistol bullets run a good ways before they finally keel over? I’ve not only been hunting myself for the last 50 years, but have ardently watched as hundreds of game animals have been shot by other hunters on Video. Almost always, they are using the competitors rifles simply because White can’t afford to advertise like they can. Most are also using the popular 250 grain pistol bullet in a saboted 50 caliber rifle, of whatever brand. Few animals are slammed to the ground. Most jump, then run off, only to fall later. Let’s examine the reasons why.

I prepared three rifles with three different loads. The first, illustrated as Trace 1 below, in red, is a 50 caliber rifle loaded with a Hornaday .452 XTP bullet weighing 250 grains and three Pyrodex pellets.

The third, illustrated below as Trace 3, in blue, is a 504 caliber rifle loaded with a White 460 grain PowerPunch slip-fit bullet and a modest load of 100 grains of 777.

VELOCITY- In this modern world, velocity seems to be awfully important, so let’s look at it first. Goodness, the Hornaday 250 grainer in trace one (in red) starts out at a terrific 2005 FPS. The 350 grain 40 caliber bullet in the White 451 only gets 1550 at the muzzle and the White 50/460 PowerPunch starts out at a lowly 1450 FPS. Looks like the Hornaday would be the winner, except that it rapidly drops off, meeting the other two in the1200 FPS range way out at roughly 175 yards.

Most of us know that a light bullet that loses velocity rapidly will lose energy even faster. Let’s see how the same loads above perform with energy:

ENERGY- Obviously, all the loads start out with nearly or somewhat more than 2000 ft lbs at the muzzle. The Hornaday 250 grain bullet starts out with 2221, the 40 caliber 350 grain PowerStar shows 1868 and the 504 caliber 460 grain PowerPunch demonstrates 2148 ft.lbs. However, by 60 yards, the lighter 250 grain bullet has fallen below both the others and is substantially lower at 100 yards. At 200 yards, it has only 734 ft.lbs., a relative disaster when compared to the other two, both of which have better than 1100 ft. lbs. of energy remaining.

But doesn’t the higher velocity of the 250 grain bullet in trace one give the hunter a real advantage? The holdover should be far less and the shot far easier to make with the higher velocity bullet. No? Isn’t it this factor that we see advertised by the big companies with their new fancy rifles, loading three Pyrodex Pellets and a light , short Pistol bullet.? Lets see just how bad the total bullet drop is, relatively speaking.

The rifles are now sighted in at 150 yards. The chart will show us just how much hold under or over we will need at any specific range.

PATH: Looks like there is a whole 2 inches difference in apogee between the fastest load and the slowest, the 250 grain Hornaday shooting 3.05 inches high at 75 and 100 yards, while the 50/460 PowerPunch shoots 5.1 inches high at the same range. At 200 yards, the shooter would have to hold 8.17 inches over with the 250 grain equipped rifle while the holdover with the 460 grain bullet would be 11.21 inches, with the 45/40-350 in between at 9.42 inches. That’s not enough of a difference to be able to even see with open sights and would make the difference between holding low on the spine or high on the the spine for a heart shot on a small Texas Whitetail if you had a good scope and a steady rest. If no rest, a good breeze, or you are a lousy shot like most of us, it makes little difference.

So the heavier bullets have a decided advantage in energy at extended range, although not within 50-60 yards, while the lighter 250 grain bullet has a slight advantage in holdover when shooting distances at up to 200 yards. However, the real difference in knock down or killing power is not just energy. It is a combination of bullet weight, diameter and velocity. The old TKO formula (Bullet weight X diameter X velocity divided by gravity) yields a constant which compares the effectiveness of various bullets. The Momentum chart below approximates the TKO formula (although not the absolute numbers).

Well, the reasons why the heavier White bullets are slammers while critters run off a ways with light , short, poor BC pistol bullets should be obvious. That, of course, presumes that the shot is good, with multiple organ systems damaged and eventual death more or less guaranteed. If the bullet doesn’t get into the boiler room, it doesn’t matter what the BC, or the Energy, or Velocity or Momentum is. None of them matter much when you miss the mark.