Ben Guild is normally a loquacious sort and wasn’t sparing the syllables as we strolled along a well-worn trail towards a “moose pasture” that we suspected lay close by. I am not one to listen long without comment either and the lies and banter flew. The hour was bright and early, just after sunup on a crisp September Alaskan day in 1972, the kind of blowsy-breezed sun-shiny day that would delight any muzzleloader’s heart after days of cold rain and ankle deep mud. 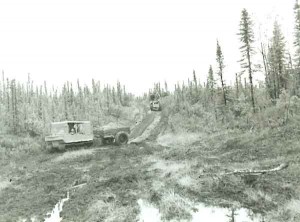 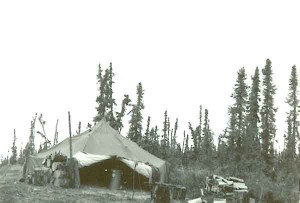 It took two days on a rain-soaked muddy trail to get to Moose Camp to the south of the Chistochena about 40 miles. Some of the bog holes were big enough to swallow the buggy and trailer. We camped out overnight, putting up tents to keep the continual rain off. The weather was typical early September panhandle Alaska.

This was the sixth day of what had become a yearly trek to the great state of Alaska. It had started for me in Roosevelt, Utah, where I live and practice medicine as a sideline to building and shooting muzzleloaders, progressing to Salt Lake City where a giant jet had whisked my buddy Fred Goodhue and I to the Anchorage International Airport. There we had been met by “Dusty” Weigner, an affable sort who is addicted to hunting and guides to be able to do it. He is also a muzzlegunner and runs the “Gun and Ammo” shop in Anchorage in order to claim his hunting as business expense. Fred owns a motel in Roosevelt and was on his first Alaskan trip. He and the assistant guide, Red, had taken the opposite direction this morning in hopes of spotting a large bull moose. 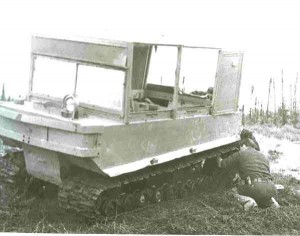 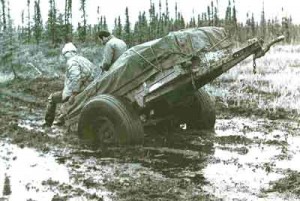 The swamp buggy, a Studebaker made for WWII use, was continually throwing a track. We became quite adept at getting the track back on with minimum problem. Most of the equipment we used was military surplus, including that huge wheeled trailer to the right. It is just resting while the track gets put back on.

The area certainly looked like superb moose country. It lay along the course of the Chistochena river in South West Alaska, was low, swampy and covered with the low waist high brush on which the moose browse, interspersed with copses of small 10-12 foot tall spruce. It was also hard to get to, requiring a full day trip by tracked swamp vehicle to get there. Most important, there wasn’t a navigable air-strip within three miles of camp. That fact guaranteed few competing hunters. 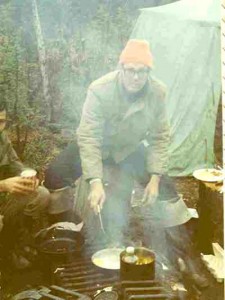 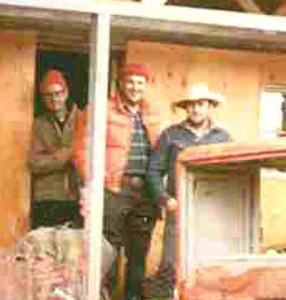 Fred Goodhue ran a restaurant so guess who got to do the cooking. Once camp was reached, we had a pleasant frame and plyboard cabin to camp in. It even had a wood stove which would smoke you out quick if you didn’t keep the draft precisely adjusted.

We had already seen a lot of moose sign and another dude, Art Ressel, a Hawken collector from St. Louis, had taken a small bull with a single shot from his (ugh) 270 just the night before. He and I had been returning in the near dusk from an afternoon hunt when we heard something grunt over the near ridge. Great bear country this, so we both snuck through the brush with weapons at the ready only to encounter a lonely cow and an over-ambitious young bull at about 150 yards. Art hit the bull in the near shoulder for an instantaneous kill. 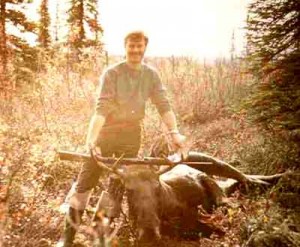 A young Mulligan moose it was, so called because such young animals make such succulent stew, about 1000 lbs. on the hoof, two years old with a three foot antler spread.

There’s nothing like moose filet mignon after a long day. The seven of us in camp polished off both filets in one meal that same night, about 5 lbs. apeice.

Many were the tall tales that regaled the crowd that night. We heard everyone’s life history as well. Ben Guild was a teacher and writer by profession, adopted Alaskan by avocation and a muzzle-loader for the pure sport of it. He had brought along a 58 caliber flintlock rifle of sturdy proportions which he loaded with a big 500 grain Minie ball in front of 120 grains ffg Black Powder. Goodhue had brought a short, heavy mountain-style half-stock percussion rifle I made for him in 45 caliber, which shot 80 grains ffg black powder under a long 475 grain slug. The slug loaded like a Minie ball without patch. Ressel had a 270 – funniest rifle-gun that Guild had ever seen; it didn’t have a ramrod. I was carrying an original English double rifle created by John Hayton which I had rebarreled to 451 caliber with 1-20 twist, regulating the barrels to shoot a 70 grain load behind that same 475 grain slug that Goodhue was using. The slugs were sized to .450 so they would slide easily down the . 451 land to land bore of our rifles- the bullet just barely fit. This was the bullet which later became the White Super-Slug and later the White Power-Punch.

Early next morning we loaded those rifles and struck out. I and Guild together and Goodhue and Red in the opposite direction. Ressel and the rest went after the mulligan moose he killed the night before.

Guild and I were swinging along chattering like a pair of blackbirds. We had left camp about 600 yards behind when four cow moose loomed out of the brush. Suddenly there they were, about 300 yards ahead of us, no big bull in sight. We crouched down in the brush and watched. Luckily the wind was in our favor.

After a few minutes of watching we took advantage of the scattered spruce and crept closer, finally coming within 40-50 yards of the big animals. There were three cows and a calf, but without a big herd bull in evidence. The moose were browsing along on the hip-high brush, moving slowly to our right up a low hill.

We waited until the last cow went over the top, then followed, being careful to keep the breeze in our faces. We topped the hill together to see the cows and calf disappear into a thicker stand of trees about a hundred yards away. We quickly crossed the more open area to the trees, sneaking quietly and keeping a sharp eye out for the herd which we expected would be immediately within those trees.

Just within the limit of trees, we found a deeply rutted and freshly trampled moose path. We saw the tracks of cows, calves and, glory be, a huge big track that dwarfed the others. This animal was so heavy that the hooves splayed out widely and the fetlocks showed plainly in the mud. Ben gave me a hard look and soto voiced his unspoken question, “wonder where that bull is?”

I had raised my head to speak to him and as I turned to whisper I spotted two cows standing beside a big snag with whitened upflung branches. “Look”, I whispered and pointed with my chin, starting to say, “cows”, but ending with a strangled grunt as I recognized that snag to be our long-sought bull complete with a huge set of antlers.

“There’s the bull!”, I blurted out and threw old John Hayton to my shoulder. Ben was standing off to my right and behind a tree so he couldn’ t see the bull too well or even get a shot. All he could do was flinch when I jerked a shot out of old John at the bull.

I could see a tall set of antlers sweeping back over a huge shoulder standing high above the brush and a big nose pointed straight at me. I held on the shoulder- about 125 yards away. On the crash of the shot there was a solid thunk and the bull burst into a dead run to the left, angling slightly my way. He crashed through the trees and brush for 50 yards then come to a stop. He turned to look back the way he had come.

Old John was on the second barrel by then and I slammed another big slug at his black hulk. He whirled and ran another 25 yards or so then stopped again, obviously badly wounded, I could see that Ben was on his trail by then, but he was behind the bull through the trees to the right.. Old John Hayton was loaded by then, disposable quick-loaders, the slip-fit bullets and a neck slung capper making the job quick, and I approached the bull, now about 75 yards away. He suddenly fell to his knees then rolled over on his left side just as Ben came up on him and mercifully ended his life with a shot in the neck. 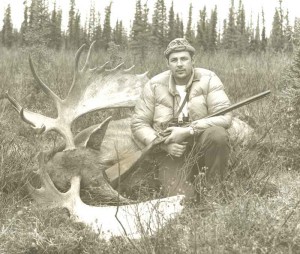 Here I am with John Hayton and the biggest moose I had ever seen, let alone shot. The 475 grain slip-fit bullet took him on the point of the shoulder, crashed through the heavy bone then blew on through the front left lung, the pulmonary arteries then on through the rear right lung to end up under the skin on the right flank. He went perhaps 50 yards after the first shot. The second shot hit a little further back but took out both lungs. I still have that beautifully mushroomed bullet. It’s one of my prize possessions. I was 36 years old at the time.

Even when you suspect that the animal is dead, you approach a downed bull moose with great respect and temerity. And I did this one, maybe even with a little quaking in the knees. But not only with respect and temerity but with real awe and admiration at the magnificence of the animal. I had to stand there and just admire him for a few minutes.

Ben whooped and smacked me between the shoulders then stuck out a grimy paw. I shook it and mouthed appreciation. I was struck with a sense of humility and thanksgiving in the presence of this once mighty animal. This always happens to me when I kill such a beautiful animal. I thanked him aloud for the sacrifice of his life and asked his forgiveness for having made meat of him.

We then got on to the days work- gutting and skinning the bull, then cutting him into quarters for easier carrying. The antlers measured 58 inches in spread and scored about 200 Boone and Crockett points green. No record bull this, but big enough to hang in my office with old John Hayton under his nose any day of the week.

The rest of the hunt was anticlimax for me. I enjoyed the weather and scenery and took many a picture. Fred and I were hunting along toward the first days camp on the last day of the hunt when we ran into a mulligan bull that just begged to be made meat of. Fred killed him with a neat shot in the neck and we ate filet again that night. Next day we were back in Anchorage and the day after back in Roosevelt.. Three weeks later our moose meat arrived, neatly butchered, frozen and packed. It was good eating, even compared to the excellent local beef.

P.S. For a real adventure, a moose hunt on the Chistochena is hard to beat. No easy hunt this, it requires time and some ability as a hunter. Dusty isn’t the kind to show you a moose and let you think that you found, trailed, killed and cleaned the animal. You will get to do those things for yourself and with a minimum of direction as long as you do them well and with lots of emphasis on detail if you don’t. He’ll be concerned if you stay out too late after dark in bear country and feed you until your brjtches burst. He’ll even tell you a good night story if your nightly exhaustion allows you to stay awake long enough. You’ll get wet, sleep on hard ground, slog 20 miles a day through ankle deep mud and love it. I did.