Big Bucks in the Book Cliffs of Utah

After a 4 year wait, the Book Cliffs area of Northeastern Utah had finally re-opened for mule deer. Predators, new roads, over-hunting and poor fawn crops had decimated the previously plentiful deer to the point that the area was closed to hunting 1996-2000. It had previously been one of the mule deer hot spots of Utah.

When I first came to the Uintah Basin in 1968, the area was accessible only by horse or jeep and big bucks were common. No one ever killed anything less than a 4 point or with less than a 24 inch spread. Those days disappeared when oil was discovered in the area. The oil field roads had opened up the Book Cliffs to any light truck, no 4 wheel drive needed, and the deer began disappearing.

Luckily, both my son David and wife Debbie and I had drawn licenses for 2000. We were three out of only 65 muzzleloading hunters in the huge area. Only 250 hunters would access the area for all three seasons- archery, muzzleloader and rifle.

Now it was September. The archers had already had their turn and a few bucks in the 30 inch range had come out. They were mighty impressive with their velvet still on. By the time the muzzleloader’s  turn came the velvet was gone and so were most of the leaves, The air was crisp and cold at 8000 feet but the weather was otherwise pleasant. We packed up my tipi trailer and pitched camp in a low draw off Indian Ridge. There were elk in camp every night, whistling and blowing around the tipi as they came down for evening water.

The Book Cliffs are a migration area. The deer come up and over the ridge, which is 8000 feet high and many miles long, in order to get to the winter grounds low on the other side. Oddly, they move south to north. Also the best water is on the ridge. In this dry country a deer may have to climb a mountain to get a drink.

The technique is to establish a stand near a deer trail on the ridge. With mule deer, that means at least 100 yards away and better 150. With modern rifles 200 yards is even better. The deer come over the ridge in a rush, not wanting to be out in the open any longer than necessary. Often all you see of a big buck is his behind bouncing through the tall brush. To be effective, you have to get in front of him.

We had seen several bigger bucks early on, the biggest perhaps over 30 inches. The next a solid 29 and heavy. Both were moving fast at near 200 yards when seen, no shot for a muzzleloader, even with one of my long bulleted in-line creations. Debbie finally succumbed to the lure of a 25 inch 4 point that made the mistake of crossing in front of her, chased him into the brush and put him down with a single shot from her .451 caliber White Whitetail rifle.. Her Shoshone great-great-grandmother, Sacajawea, would have been proud. She is a fine shot and good hunter. David says that he finally decided to propose after he killed a deer and she promptly cleaned it, getting it done while David was thinking about getting out his knife. She makes great company in a tipi camp.

On our third day out, I had picked a secondary ridge to watch. We had arrived at first light only to spot 4 bucks climbing the ridge heading towards a water hole about 300 yards away. The hill was devoid of trees or any cover to amount to anything, but did give me the advantage of circling around to their front as I tried to close the distance.

Three of the bucks were average 22-24 inch 4 pointers but the fourth was much larger, I guessed perhaps 28-29 inches and quite heavy. Naturally, the bigger deer was the farthest away, topping the ridge in front of me about 140 yards off. The buck caught me right out in the open as he came over the hill. Their not only was no cover, there was no rest for the rifle, no place to sit or lie down or a dead rest, the brush being too small for a rest and too tall to allow sitting or lying down.

I was forced to shoot offhand, taking as dead a rest as I could off my rather generous anatomy. I was shooting a White 410 caliber Super. 91 that I had modified with a Kentucky style fullstock, adding patch box, false lock plate and brass trigger guard. There‘s a rattlesnake on the patchbox that says “Don’t Tread On Me!” My load was 60 grains of Pyrodex P under a White 320 grain slip-fit SuperSlug fired by a CCI #11 cap. The load is capable in 1.5 inch groups at 100 yards. 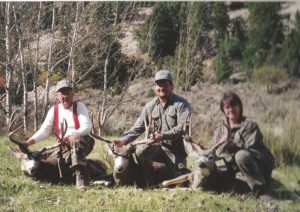 Doc, David and Debbie with their mule deer- a wonderful hunt

The buck was standing at almost exactly my sight-in point of aim so I held slightly behind the shoulder low on the chest. At the shot , there was a sodden smack and I knew I had a hit. The buck leaped forward and down the hill disappearing in the heavy brush. I reloaded as quick as I could, taking advantage of the speed loaders I carry, and rushed around the base of the hill.

To my tremendous surprise, I found a gang of hunters standing around what appeared to be the buck I had just shot. They had been watching the scene play out from the other side of the ridge and had rushed forward when then saw the deer come tumbling down the hill. Also to my surprise, the bullet had hit the forward part of the shoulders, almost breaking his neck and luckily blowing the dorsal aorta in half. So much for my vaunted offhand shooting. All neck shooters are liars anyway.

Next day David killed an even bigger buck in the early morning light. He had been practicing with his .451 caliber Super 91, shooting 110 grains of Pyrodex P and the White saboted 45/40-350 bullet (45 caliber sabot, 40 caliber bullet weighing 350 grains) at up to 200 yards. He had become quite good with it. His buck jumped out of the brush at 15 yards and the shot was more like shooting quail then deer. His deer was a generous 29 incher with good mass and beautiful conformation.

We had a great hunt, hard to duplicate. Three good deer and company I love. By the way, camping in a tipi is a delightful experience, especially when you have a Debbie there to take care of you. I would that I could do it again someday.